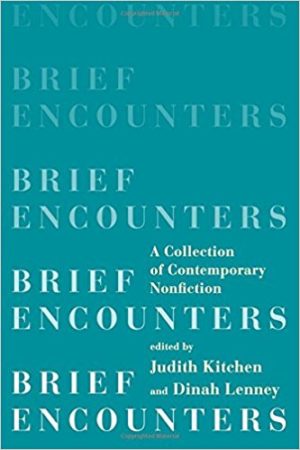 My short essay about walking the waterfront, “Crease,” is one of many flash nonfiction works in this vast and beautiful collection.

[For the originally published version  of “Crease,” and the photograph that inspired the writing, see the artist book Open for Interpretation/ The Water’s Edge.]

The best of short literary memoirs, essays, and reflections, many of which were written expressly for Brief Encounters.

The late Judith Kitchen, editor of the perennially popular anthologies Short Takes, In Short, and In Brief, was greatly influential in recognizing and establishing flash creative nonfiction as a form in its own right. In Brief Encounters, she and writer/editor/actor Dinah Lenney expand this vibrant field with nearly eighty new selections: shorts—as these sharply focused pieces have come to be known— representing an impressive range of voices, perspectives, sensibilities, and forms. Brief Encounters features the work of the emerging and the established—including Stuart Dybek, Roxanne Gay, Eduardo Galeano, Leslie Jamison, and Julian Barnes—arranged by theme to explore the human condition in ways intimate, idiosyncratic, funny, sad, provocative, lyrical, unflinching. From the rant to the rave, the meditation to the polemic, the confession to the valediction, this collection of shorts—this celebration of true and vivid prose—will enlarge your world.